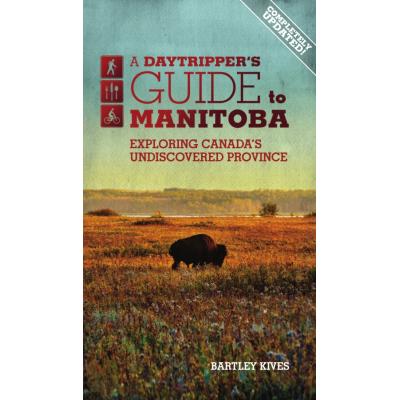 A Daytripper’s Guide to Manitoba" is the only comprehensive travel handbook to the province. Sandwiched between North Dakota and Nunavut, Manitoba has never been the busiest chunk of tourism real estate in North America. To independent travellers, this is a good thing: Canada’s undiscovered province offers uncrowded beaches, innumerable lakes and unlikely cultural attractions. Get the straight goods on cities, towns and natural attractions in every corner of the province, compiled by one of Manitoba’s most tenacious independent travellers.

Forget what you think you know about the Canadian prairies – the only thing flat about Manitoba is the Trans-Canada Highway.

Praise for previous editions of A Daytripper’s Guide to Manitoba:

“Instead of just relying on promotional material, Kives appears to have worn out tire rubber and shoe leather getting to know Manitoba’s cities, towns, backroads and wilderness areas. And instead of repeating clichés, Kives uses the same idiosyncratic, opinionated style that he employs in his Offroad columns…” — Bob Armstrong, Winnipeg Free Press

“An excellent handbook for pointing out the incredible array of places worth visiting that are all too often overlooked.” ¬— T. Keith Edmunds, Brandon Sun

“In adition to its being a wonderful resource for planning family outings, Kives makes it a more enjoyable read with his personal insights (“Bartley-isms”) into the places he has visited.” - Devi Sharma in The Winnipeg Free Press

Bartley Kives has been writing about urban aff airs, pop culture, travel and sustainability in Winnipeg since the 1990s. He is reporterat-large for the Winnipeg Free Press and an occasional broadcaster. He is the co-author of Stuck in the Middle: Dissenting Views of Winnipeg.